Marijuana in the Workplace: How It’s Changing the Drug Screening Process

Despite the debates in the headlines and the legalization of some kinds of marijuana use in certain states, federally, marijuana is still considered an illegal substance by the US Controlled Substances Act. However, 33 states have legalized marijuana use for medicinal or recreational purposes, and there is growing support among some for legalizing marijuana in other states. Given this trend, there are important implications for the use of marijuana in the workplace as well as for employment drug screening.

Key Considerations for Marijuana in the Workplace

Whether there is a concern about the impact of marijuana use on an employee’s ability to operate equipment in the workplace or there’s a desire to promote a drug-free workplace more generally, employers need to understand the ins and outs of marijuana legislation and what those laws mean for marijuana in the workplace. In addition, based on the legal context, industry requirements, or company objectives, a company may decide to conduct drug screening only for new hires or to conduct screening on a continuous basis. Here are some key factors to consider when devising or updating workplace policies:

Some state court rulings have provided guidance about marijuana in the workplace, but others have not—and the interpretation is not always clear. Sometimes, laws in the same state can appear to conflict with each other. For example, the Colorado Supreme Court ruled that an employee can be terminated from employment for testing positive for marijuana, even if the employee was using marijuana in compliance with Colorado's medical marijuana law.

The states that have legalized marijuana possession and use, whether for medicinal or for recreational purposes, do not have identical laws across the board. Some states limit the amount of marijuana a person can purchase or possess, whereas other states have simply reduced the penalties associated with marijuana possession. Companies with employees in multiple states must be sure that any drug screening policies can be consistently applied to all employees, regardless of location.

According to the non-profit Institute for a Drug-Free Workplace, “The impact of employee marijuana use is seen in the workplace in lower productivity, increased workplace accidents and injuries, increased absenteeism, and lower morale.” Furthermore, a study by the Drug-Free America Foundation compiled research from numerous sources outlining the impact of marijuana use on workplace productivity, noting that marijuana users have 85 percent more injuries at work than non-users. Companies that want to ensure employees are able to perform their roles consistently without impairment will, therefore, want to have a clear position on marijuana use in the workplace that keeps employees productive and safe.

Unlike other drugs classified as illegal by the Controlled Substance Act, in some states, marijuana can be legally prescribed by a doctor to manage an individual’s medical condition.

Therefore, it’s possible to have employees whose use of medical marijuana is necessary for their health and well-being but who are in roles where the use of a controlled substance is prohibited. In those cases, these employees may also be eligible for certain workplace accommodations.

To stay in compliance with state laws and make certain that employees’ medical marijuana use does not put any employee or customer in an unsafe position, employers need to provide clear guidance to employees about acceptable medical marijuana use and how it impacts their employment upon hire and on an ongoing basis.

How Marijuana Is Changing Drug Screening

Marijuana has grown in popularity and is now the most often-detected in workplace drug testing, according to a Quest Diagnostics study. Whereas in the past, a detection of marijuana in an employment drug screening would have led to immediate termination or a withdrawn offer, today’s laws make that likelihood a bit less clear-cut. In some places, such as in New York City and Nevada, pre-employment drug screening for marijuana has been either outlawed or prohibited as a reason for denying employment to a candidate

Contrary to what some might think, the legality of marijuana in certain states doesn’t require employers to allow it in the workplace. As one employee assistance company representative notes, “Just because it's legal doesn't mean it's acceptable at work.” The representative adds that companies still have the latitude and responsibility to protect employees and customers from the negative effects of workplace drug use.

When navigating the dos and don’ts of employment drug screening, companies should take the following steps:

Some positions, whether because of the people they interact with or the equipment they use on the job, will necessitate required drug screening. For example, commercial truck drivers are required by federal law to undergo drug testing. Organizations in industries such as healthcare and financial services may also require drug screening for certain positions.

Create a Clear Policy on Marijuana in the Workplace

Local and state laws governing marijuana in the workplace are changing all the time, and there are many stakeholders: employees, customers, insurers, and the general public. Companies with a clear policy outlining specific drug use and screening activities will be in a better position to inform and protect key stakeholders and have a healthy, safe workplace. A comprehensive policy on marijuana in the workplace should include:

As with other talent management challenges, companies don’t have to be alone in designing and implementing a comprehensive marijuana drug screening program. Working in conjunction with a reputable background and drug screening partner, companies can:

Marijuana in the Workplace: Still Evolving

There is still more to come with marijuana legislation. States that have legalized medicinal use may expand to include recreational use, and laws that govern workplace protections continue to evolve. Despite this, there are specific actions companies can take to ensure a safe and drug-free workplace. By consulting with a drug screening expert, companies can not only stay abreast of developments on the legislative landscape but also implement a drug screening program that is both legally compliant and effective. 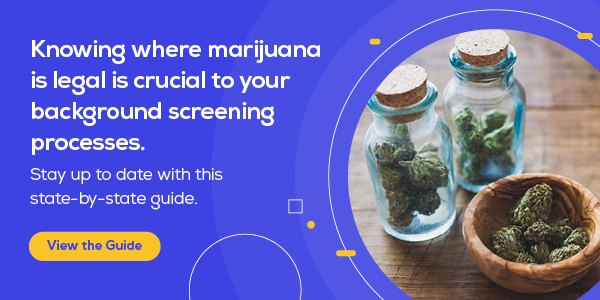 Criminal Record Searches and Drug Screening: 7 FAQs on Hiring and the Legalization of Marijuana
Read

What Is the Lifetime Value of Ongoing Drug Screening?
Read